The neurologist conducted a second round of field tests on our son then excused herself from her office for a few minutes. After what seemed like an eternity, she reentered the room and closed the door. It was our second visit that year-there generally isn’t a diagnosis given at the first appointment-and my wife and I braced ourselves for what we knew deep-down was coming.

Still, her words- one phrase in particular, actually- hung in the air like a bad curveball from a washed-up pitcher. I don’t recall the sentence verbatim, just that her findings were “consistent with autism.”

Our two-year old son, who was struggling to communicate and missed a handful of traditional milestones, was now part of a frightening statistic.  According to the Centers for Disease Control and Prevention (CDC), 1 in 68 children born today are on the autism spectrum. (When our son was diagnosed a little more than five years ago, that figure was 1 in 88).

That summer day fit the mood. It was dark, gloomy and uncharacteristically cold.  As my wife and I walked to our car in the neurologist’s parking lot, the rain spit on us and the emotion of more than a year of wondering what might be happening boiled over. We put our son in the car, briefly embraced and each began to sob softly. Both of us have experienced moments of frustration, sadness and joy along the way since then, but it is the only time we have ever cried tears of sorrow together over our son’s diagnosis.

What we did not know at the time-thanks to many angels on earth disguised as strangers we had yet to meet-was that there were brighter days ahead for our family.

I remember the first time I was exposed to autism on anything more than a casual basis. I was the Director of Public Relations at Richmond International Raceway, one of the most popular NASCAR and IndyCar tracks in the country. Working there was the type of fun, high-profile sports job I dreamed about as a kid, and I worked with many amazing people, companies and causes.  One of the NASCAR drivers I worked with to promote our events was from nearby Emporia, Virginia. Hermie Sadler has a daughter on the autism spectrum and he called one day and asked track president Doug Fritz and me if we would be interested in possibly organizing a benefit event for a nearby school for children with autism. Knowing the type of people Hermie and his wife Angie are, we were delighted to help. (In fact, not long after our son was diagnosed, I emailed Hermie then spoke with Angie. They were incredibly supportive and helpful). The go-kart racing event held a short time later with several NASCAR drivers raised a nice amount of money for The Faison School for Autism in Richmond.

Slowly, my exposure to the disorder began to grow as other autism organizations became involved with NASCAR on a larger scale. I had no idea that one day in the near future that I would need to learn so much more about autism.

After our son was diagnosed, that learning curve was quickly accelerated thanks to many wonderful people. My brother and sister-in law Tom and Val arranged for a meeting with Dr. David Sidener, the head of The Garden Academy, a school for children with autism here in New Jersey, where we now live. But it was a terrifying time. Our son was communicating in one or two word increments.  When he was hungry, he would stand next to the refrigerator or pantry instead of telling us what he wanted.  We were learning that the autism “spectrum” could mean literally just that, a wide range of intellect, agility, strength, communication, temperament and ability to focus.

During our morning together, Dr. Sidener shared many great nuggets of information and wisdom with Donna and me, but there was one thing in particular that we took to heart we have never forgotten regarding our son’s care: “You’re in a race against time.”

Studies show that early intervention is key to helping a child with a disability to succeed, especially one with an autism diagnosis. That intervention could mean many types of care, including speech therapy, occupational therapy, physical therapy, applied behavior analysis and many other types of conventional and non-traditional methods of treatment. For our son, some of these types of therapies started around the time he was two, which was after the first neurology appointment, but before the formal diagnosis at the follow up visit.

Watching these therapists help our son in our home or at an office was amazing and inspiring. We were not sure of the best ways to manage his stimming, hold his attention, redirect him when needed or as crazy as it sounds, the most effective ways to interact with him. But the weeks of therapy led to months, the months led to years, and our son’s improvement, along with our ability as parents to help him- have been nothing short of remarkable.

As we began to see the steady progress our son was making thanks to his hard work and the amazing professionals helping him, it occurred to me that it made sense to do something for the autism community. For more than three years, I have contemplated starting an autism-related, non-profit foundation. There are so many great organizations doing incredible work in research and funding programs that I was not sure how I could help or potentially make a huge, lasting difference.

One day it finally hit me. Education has played a huge role in my life. My mom was a remedial reading teacher for more than 30 years. My wife has taught at every level from elementary through college, and as an adjunct faculty member, I have had the pleasure of sharing my sports marketing and PR experience with students at several universities. But suddenly, when the stakes were the highest and our son needed the expertise we were not properly equipped to provide, many amazing, highly-skilled professionals and therapists entered our lives to give our family guidance. For that, along with the thousands of additional sessions and conversations yet come, we are extremely grateful.

In 2015, I am launching the Autism MVP Foundation. Part of the focus is to provide college scholarships to individuals who want to dedicate their careers to helping those on the autism spectrum. For matriculating undergraduate college students or those continuing their education for a Master’s, Doctorate or autism certificate program, we will provide financial assistance to help offset tuition costs.

We will honor, recognize and create:

It is estimated that 90% of people on the autism spectrum are unemployed or underemployed. By increasing the number of educators and therapists in the marketplace, we will help more children on the autism spectrum reach their maximum potential and make a significant impact in our communities. But we need your help, please support our mission and donate today.

Tickets for our 8th Annual Walk  Event Nov. 6 are on Sale Soon! 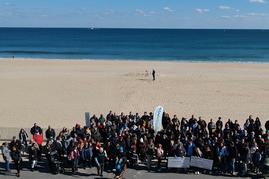 I feel blessed that I have spent most of my career in the type of jobs I dreamed about as a kid that matched my sports passion, such as working for the Philadelphia 76ers and then in the NASCAR field.  Honestly, I know little about starting and running a non-profit organization, but I am learning. My research and work continues even as I work a full-time job.  I am humbled that many people I have worked with throughout my career or know through other aspects of my life are already helping me get this off the ground or want to become involved. I am excited, because these are smart, dedicated, passionate and experienced people who share my vision.

I’m not sure what I am doing is necessarily “gutsy.” Hearing that a quarterback has “guts” to make a challenging throw during a critical time of a game is trite and insulting to people who do things like put their lives on the line for our country every day. I do know that it takes courage to try and make a significant change in anything in life, and that change requires passion.  And all I know as I watch our son grow and blossom is that I am more passionate about this foundation than anything I have ever done.

I came across a quote from Mark Twain earlier this year that resonated: “The two most important days in your life are the day you were born and the day you find out why.”

Now it’s time to do it and make a huge, lasting difference. 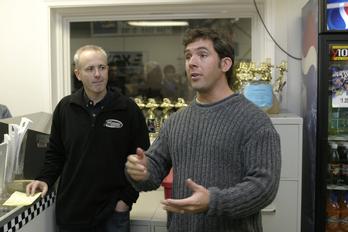 The Autism MVP Foundation is a non-profit, 501 (c) (3) organization founded in 2015 by Keith Green. Keith, his wife Donna and their young son live in New Jersey, where the autism diagnosis rate is the highest in the country (1 in 34).

The organization is comprised entirely of volunteer board members who have decades of experience in fundraising, marketing, PR, events, education, graphic design, sponsorship and digital media.